nothing boils your scalp more than the scorching afternoon sun, blazing, like hell rented a space in the sky. this skin, this black skin, like it was designed to sponge up heat—because the burn is all you’ve ever known & all you may ever know. Africa is the closest continent to the sun, that’s what your mom told you. when you stroll the streets of Lagos, you comb through the seething mass of the city—the city overflowing with a stream of bodies enough to melt an iceberg. except, it’s the sun that melts your body. your face becomes a fountain expelling sweat & your tongue becomes a parched well. your eyes drip water slowly like a leaf shedding last night’s dew. it’s the heatwave. it’s causing your eye balls to break sweat. but you wonder how the day & night spill clashing breeze. the night begins with hot air. you rip your shirt off & toss it aside, but at midnight a sudden chill sends you trembling in search of a blanket. while during the day, the sung hangs like an old ceiling fan. it blows heat but you can never turn it off. instead you allow yourself sunburn.

LESSON FROM A HAPPY FREAK

one summer break, my dad brought a ball home.
the front yard pretended to be a football field & two bricks
fisted into the ground decided to be our ball post.
my sister & i played everyday, even under the rain,
we convinced ourselves the ground beneath would
wash away if we didn’t stomp on it & play.
so we played & played, that even the sun smiled at our
happiness. it wasn’t long before we started calling our
neighbors to lend us extra legs on the field. that same day,
in the spirit of sport, the ball had too much fun & collapsed on
my dad’s windscreen. shattered glass. stabbed ball. the house
storeroom became my new bedroom and my sister & i, ten feet apart.
sometimes being happy as a lark about something can ultimately jinx it. 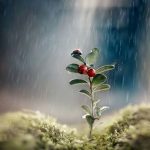 Poem: What the Rain Does & The Theory of Time By Ashinze Patrick

Poem: Open letter to you in a cartwheeling silence by U.A Edwardson 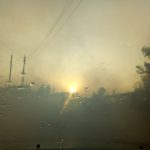 17 thoughts on “POEM:SUNBURN & LESSON FROM A HAPPY FREAK By Praise Osawaru”