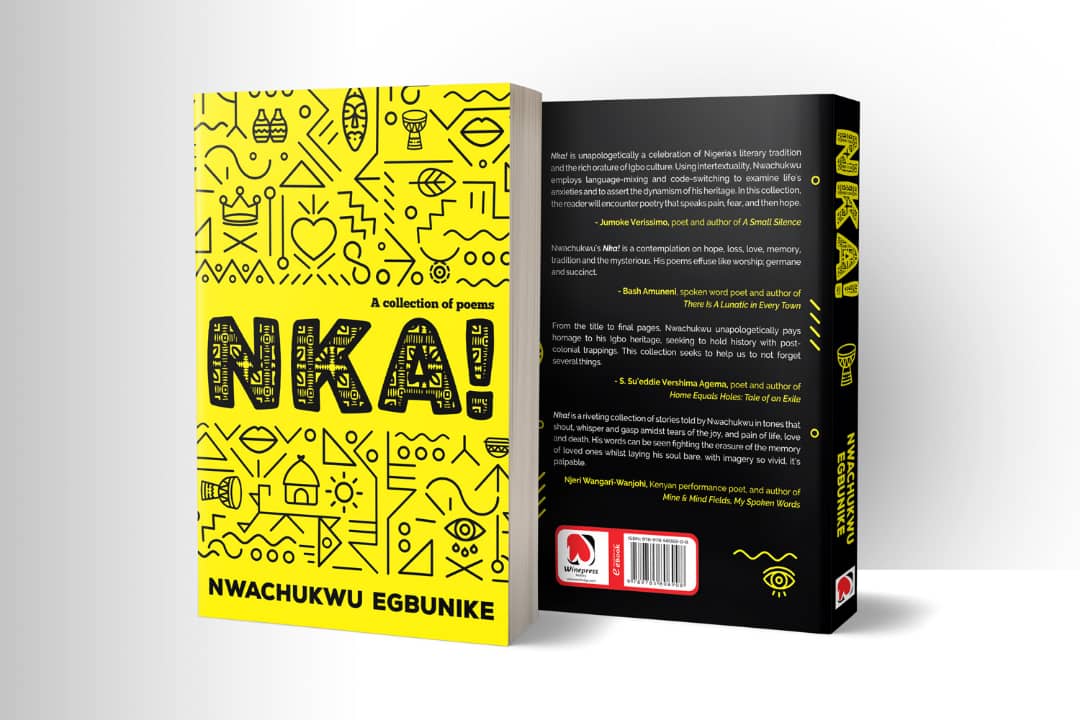 NKA! AND THE INCANTATORY REAWAKENING OF MEMORY’S FIBRE

Nka! is Nwachukwu Egbunike’s second poetry collection by Winepress Publishing (2021). It contains forty-seven poems in three parts; sometimes incantatory, sometimes celebratory, sometimes dirge-like – the words in the pages swing through the corridors of the personal and the universal, the sacred and the mundane.

The cover page design benefits from the hieroglyphics of nsibidi – an ancient Igbo/Ibibio writing system that uses pictorial symbols to represent individual sounds as a rebus – by so doing, Nwachukwu draws us closer to the materiality of his muse. He relies, for most parts of the collection, on his Igbo ancestral worldview, spirituality, and idiosyncratic patterns of speaking, hence, it is not uncommon to see proverbs and mythological elements of Igbo folkloric narratives jumping out from the forehead of antiquity to grace the metaphors and hyperboles that strings the words into music. He dedicates the collection to his late father and lets the poems trail off from the evocative spirit of that dedication thereby making his father’s spirit and memory the hovering personage of Nka!

The first section contains six poems which are dirge-like, elegiac, and threnodic at once, moving from earlier deaths to more immediate ones. The opening poem drags us to a funeral where we join the persona in mourning his late patriarch in the liturgical order of the Roman Catholic Church accompanied by traditional Igbo burial rites: “Aja nalu aja, ntu nalu ntu/ Ukochukwu onye ocha intones with incense…” (12) which simply translates to mean “dust to dust, ash to ash/ intones the white priest.” The poet and his poems are not shy, they join forces to defy any standing rule on the imperatives of language in writing, preferring to come out as the muse directs; it doesn’t matter if a sentence in a poem would begin in Igbo and end in English or vice versa, or if  a poem is titled in Igbo and the stanzas are written in English as in the next poem “Ozoemena” on page 14. “Ozoemena” is an Igbo name intended as a prayer to forbid the reoccurrence of a sad incident, especially the untimely death of a beloved either in a road mishap or through illness or infant mortality. So here, the persona reimagines the untimely death that snatched his beloved relation in a road mishap along the complex Ugwu Onyema in Enugu State, in a stanza that I regard as imagery-filled and fantastic:

The craters of Ugwu Onyema

Flinging through the lazy curves, curled with vengeance.

The kiss comes as a wasp seduces,

Eyes glued on a cacophonic dance

Faster than a vanquished star

Everything collapses upon itself,

What is gravity here as all

The poems in this section, as in many other poems in other sections codeswitches from English to Igbo and codemixes English, Igbo, and Latin, privileging the linguistic congeniality of the localities in the collection as well as providing insight to materialist inclinations, influences and geographical spaces inhabited mentally and physically by the author. Other times, as in poems 26 and 78, he writes the whole poems in Igbo but steps in on time to provide English equivalents in the next pages that follow.

Having noted earlier that the poet is a proud product of his Igbo heritage which accounts for the many subtle incursions of Igbo linguistic and socio-religious dogmas in the work, it is also important to note other influences that the poet embodies. I had earlier noted in my review of the virtual launch of the collection that Nwachukwu Egbunike is a poet that has read other poets and I had in mind then, Christopher Okigbo and Gerald Manley Hopkins, two notable poets of Roman Catholic influence. Nwachukwu populates that tradition as the hues of Catholicism pervades his religious leanings, the very evidence of which could be gleaned from poems in pages 18, and his iconoclastic reordering of The Seven Beatitudes, commonly recited in Catholic catechisms in page 31, etc.

In as much as the poet gestures towards the bend of Achebe and Adichie’s style of subduing the English language to accommodate and carry Igbo words and worldview, the poet’s use of proverbs and witty sayings smacks of one who has read a great deal of Niyi Osundare and Ezenwa-Ohaeto of blessed memory. This is manifest mostly in the second section where the first poem’s title appears in pidgin English, a style for which Ezenwa-Ohaeto was celebrated. The poems in this section are short, witty, and racy with surprising twists and unceremonious ends. One walks out from the pages with the same poetic experiences obtainable from Jared Angira’s oeuvre, especially his 1972 collection, Silent Voices.

There is biting sarcasm in the poem, “My Help” and the poet invites us to laugh so as not to cry when he plays the devil’s advocate by revisiting the MMM financial scandal that rocked the world and Nigeria, in particular, a few years back which had the highs and lows of Nigeria’s social strata as victims:

My head lifts up

To the MMM hill

Where my help comes from

Soon the hill levels and

The poem privileges a tripod achievement of sarcasm, social commentary, and the prophetic injunction that man should put his trust in God instead of his fellow mortals lest he encounters disappointments. This is even more vocal when you consider that the poem benefits from a rewriting of Psalm 121.

The last section, A Pilgrim’s Tale is cathartic, sober and introspective. The poems convey the plaintive appeal of Christopher Okigbo’s Idoto. They’re more serious, more grievous and portrays the more mature side of the poet. He transcends from being the pontificator in the rites of the first section, the critic and pacifier in the second section, to the sacrificial object and scapegoat in this final phase. He invites us to fill his anguish and burden of memory that tugs to unmask the defence he mounts on life’s exigencies that are both affectionately personal and sympathetically universal to him.

The structural weakness with the collection is that there are a handful of poems that shouldn’t have made the collection, especially poems from the second section titled Regurgitations. It is my understanding that ‘regurgitate’ is a verb which means to throw up or eject what has previously been swallowed – this could be a very disgusting exercise, hence I suspect that it is that act of regurgitating that must have disgusted the poet so much that he vomited lines that are at best shallow, abstract, and hackneyed, of course the extended transitive meaning of ‘regurgitation’ is to repeat verbatim. In the poet’s attempt to philosophize and pontificate, he loses sight of strong metaphors and other apt imageries to convey what is otherwise a common knowledge. However, the wisdom in adding them nevertheless is that they are sandwiched between good poems that ended up camouflaging the weaknesses.

Through Nka!, Nwachukwu Egbunike relies on memory’s fibre to reawaken our humanity and point out new directions for our collective identity. He relies on memory to chastise and to canonize. For the rites that are traditional, we follow the ashen paths walked by the poet in sack cloth and led by the melancholic whistling of Oja and the bellowing of Ikoro. For the rites that are of the Roman Catholic, we proceed through the liturgical aisle, led by the ecclesiastical strings of the organ.

Here is the poet as priest, prophet, teacher, critic, lover and human.

A 2018 Ebedi International Writer’s Residency Alumni, he’s the author of How Morning Remembers the Night, First Runner Up, Association of Nigerian Authors Poetry Prize 2020. He is the Founding Editor of Ngiga Review and the Co-Facilitator of Ngiga Book Club. He lives and works in Lagos 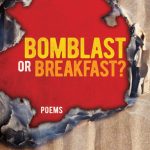 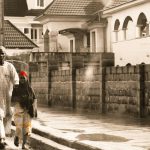 OFFALS IN THE SUN: Photo Essay By Dami Lare

One thought on “ESSAY: NKA! AND THE INCANTATORY REAWAKENING OF MEMORY’S FIBRE BY IFESINACHI NWADIKE”