In the era of rumbling clouds,
at the falling edge of a season,
a group of men having fallen
to the lure of a sorceress,
slogged down

a small valley,
to lick the urine of a woman
on the floor of a coal pit.

Years of sipping drips of dross
from the bladder of a priestess
for water,
were of a sudden tramp beyond

In numbers they stood,
exhuming guts,
in numbers they lay—twenty-one
biers and fifty-one
skeletons,
in heaps or piles— only twenty-one biers—
like frost in an Armenian River.

What is untouched
by the push of a river,
plants staring afar to cast
shadows at the nudge of the sun?

Rivers are made of delicate
unions, like life and dread
molded into a vessel
for passing bodies: flotsams,
floating ferns, floating seashells,
bodies leaving

And now, my pen bears their weight,
flesh fading to names
and spirits, swinging in thick traffic
on the way to misery.

Lukpata Lomba Joseph lives in Nigeria. He is a software developer by day and a writer by night. His work has appeared in Jacar Press’ One, Misfit Magazine, Runcible Spoon Magazine, South Florida Poetry Journal, The Collidescope, Squawk Back Journal and elsewhere. He is fond of satirical writing and also enjoys Aesop’s Fables. 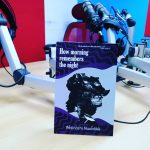 An Origami Folding with Multiple Layers of Loss, Grief and Injustice: A Review of Ifesinachi Nwadike’s How Morning Remembers the Night by Frank Eze. 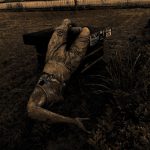